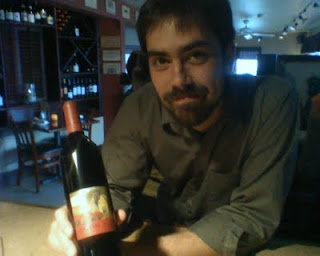 Last night got off to a slow start, so Christian and I decided to have a wee bit of fun. I asked him to pick out his favorite bottle of wine sold at the bistro, and he bee-lined it towards the racks of reds. The pick: the Justin 2007 Cabernet Sauvignon, pictured here with Christian himself.

First, the wine: Christian loves this Cab because of its big body, but he also appreciates its ability to pair with many of Prima's dishes. In particular, he digs "the dark, rich fruit"--the wine has notes of bing cherry, plumb, and grape Jolly Rancher. (Just kidding about the Jolly Rancher, kids.) The Justin, which hails from Paso Robles, CA, would do well alongside Prima's grilled lamb chops, the hanger steak frites, or even the confit of duck leg.

Now for more about Christian, our beloved server/bartender. He's been mixing drinks, serving happy diners, and entertaining us all with his boisterous baritone voice since Prima's early days. (Seriously, if you call us and Christian answers, there's no mistaking it: "Prrrrrriiiiima Bistro!" he booms into the phone, not unlike a boxing announcer introducing a bout.)

Christian, who first came to love wine while working at Seattle's Cellar Bistro in 2005, is an especially avid fan of South American wines. And it just so happens that he'll be spending six weeks in Chile and Argentina this winter, studying up on his Malbecs, Cabs, Merlots, and Carmeneres (all of which are red wine varietals), and maybe even the occasional Torrontes (a white). More importantly, Christian will be reunited with his longtime girlfriend Lena, who is spending this semester studying in Santiago, Chile.

When he's not at Prima, you can find Christian at home, sharing a bottle of wine with his dog Ada (an Australian Shepherd/Lab mix that he rescued from Craigslist) and watching a film made by one of his favorite directors--Jim Jarmusch, Ingemar Bergman, or Wes Anderson. Come in and see him sometime. And be sure to ask about his first bottle of wine. There's a good story behind that one.
Posted by prima bistro at 2:04 PM No comments: