ABSINTHE as researched and written by Lucas Clark


The precise history of the origination of absinthe seems a bit unclear, as copied directly from Wikepedia:


“"The first clear evidence of absinthe in the modern sense of a distilled spirit containing green anise and fennel, however, dates to the 18th century. According to popular legend, absinthe began as an all-purpose patent remedy created by Dr. Pierre Ordinaire, a French doctor living in Switzerland, around 1792 (the exact date varies by account). Ordinaire's recipe was passed on to the Henriod sisters of Couvet, who sold absinthe as a medicinal elixir. By other accounts, the Henriod sisters may have been making the elixir before Ordinaire's arrival. In either case, a certain Major Dubied acquired the formula from the sisters and in 1797, and with his son Marcellin and son-in-law Henry-Louis Pernod, opened the first absinthe distillery, Dubied Père et Fils, in Couvet. In 1805, they built a second distillery in France, under the new company name Maison Pernod Fils.[13] Pernod Fils remained one of the most popular brands of absinthe up until the drink was banned in France in 1914.”

Absinthe was banned in the United States in 1912 and earlier through most of Europe due to it being blamed for some horrific crimes, like that French farmer in 1905 who killed his whole family and then tried to kill himself after drinking it. This ban led to the popularization of other anise flavored spirits – pastis, ouzo, etc.  It never was banned in some countries, including Britain, where its popularity was less to begin with.


It was reintroduced to the United States in 2007 after it was generally disproven that the amount of wormwood in absinthe caused people to hallucinate. It is stronger than most spirits, usually 120+ proof compared to normal spirits (vodka, etc) are 80 proof. The strength of the absinthe could attribute to the bad name it has been given. The Roux Supreme Absinthe that we carry is 151 proof, strong enough to sterilize tools for minor surgery (personal experience, not medical science).


There are two ways of creating absinthe. The first more traditional way is to let the absinthe mature
with wormwood, fennel, melissa, mugwort, anise, etc, and then distill it down.  The second way is to cold mix the absinthe with the essential oil or essence of the herbal flavors after it has been distilled. This is a similar process to making flavored vodkas and is considered an inferior product.


Diners at Prima often ask what the difference is between the Absinthes that we carry, as the pricing ranges from 10-26 for a glass. The biggest difference is the amount of distilling.  The Absinthe Ordinaire is $10.00 and 92 proof. The Supreme Absinthe is 151 proof and $26.00 a glass. They all use many of the same base ingredients and currently they are all distilled Absinthe’s, not cold mixed. The flavors of star anise and fennel are the most potent to come though.

Here is our absinthe menu:
traditional absinthe service with glassware, spoon, sugar and water dripper is available at the bar only.  table service includes sugar cube, absinthe spoon, and a pichet of water.


Michel p. Roux… Supreme Absinthe…Provence, France
handcrafted in the south of france with a blend of rare botanicals and spices including the legendary wormwood. supreme absinthe first enjoys a long maceration period and is then double distilled.
small-batch spirit with individually numbered bottles.  $26 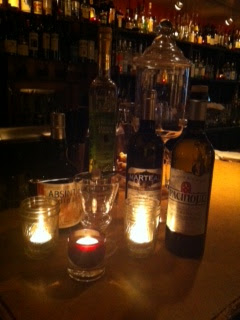 Absinthe Ordinaire… Provence, France
made from natural, traditional absinthe botanicals, not oils or essences, including a full measure of the legendary botanical wormwood or artemisia  absinthium.  some of the other botanicals that give absinthe ordinaire its unique and flavorful


Marteau…Woodinville, Wa
the finest 19th century style, fully authentic absinthe to be made and sold in the united states since 1912, just as the most prestigious brands of more than a century ago.  marteau is made with pure grape spirit and real, whole herbs and seeds, not in expensive alcohol and essences. it is literally hand-colored with the leaves of roman wormwood and melissa.  $22


Pacifique…Woodinville, Wa
pacifique absinthe verte supérieure is a super-premium absinthe, hand-crafted in exact accordance to a classic 1855 french recipe, and faithfully represents a recreation of the kind of absinthe one would drink in 19th century france.  $18


We serve absinthe in the traditional method, again from Wikepedia, “Traditionally, absinthe is prepared by placing a sugar cube on top of a specially designed slotted spoon, and then placing the spoon on the glass which has been filled with a measure of absinthe. Iced water is then poured or dripped over the sugar cube in a manner whereby the water is slowly and evenly displaced into the absinthe, such that the final preparation contains 1 part absinthe and 3-5 parts water" When water is introduced into absinthe it turns from a lite clear green into a cloudy milky green. This is because the herbs and flavors in absinthe are more soluble in alcohol then in water. The introduction of water helps release the smells and flavors of absinthe and it cuts the potency so that the flavors can be enjoyed more instead of the alcoholic burn. The green comes from active chlorophyll in the absinthe.

There is also the “bohemian” method of serving absinthe which entails burning the sugar cube…we don’t do that for a number of reasons, primarily because it ruins the flavor and is a fire hazard due to the high alcohol content.

Champagne is a good way to start a afternoon. As long it does not become a daily ritual, unless you plan on going to jail or becoming incredibly rich and famous. Champagne and absinthe in the afternoon is pretty much saying goodbye to productivity. Hemmingway invented a drink called Death in the Afternoon, an aptly named absinthe and champagne cocktail that is a way of quickly tuning up your afternoon.


I’ve spent one night drinking absinthe with the infamous Mr. Chris Adams (aka the one tooth wonder of Vegas, aka the real Mr. South Whidbey, aka The Mayor, aka Silverback, aka That Guy, aka knees, etc). It would have been a good idea to start with Absinthe and not end the evening with it, but we were not chalk full of good ideas that night. Anyway for you dear reader, I would suggest starting not ending with Absinthe, and if you are driving anytime in the next week, stay away from the 151 proof Supreme, and certainly do not under any circumstances decide to light a cigar, just after drinking it, with a beard.
Posted by prima bistro at 11:15 AM 2 comments: