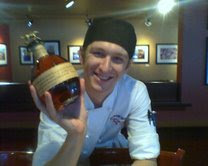 This past Tuesday marked a bittersweet moment in the annals of Prima Bistro: Evan Leichtling--our resident sous chef, punk rocker, and stylistic pariah--worked his last shift. The 22-year-old has made a name for himself at the restaurant by working incredibly hard, being awfully dependable, and wearing skin-tight orange jeans, a hat made of elephant skin, and a pair of sunglasses previously owned by Cruella de Vil.

Esoteric clothing aside, we'll miss Evan dearly. He is one of only two employees--aside from Sieb and Jenn, of course-- that were on Prima's opening crew three years ago. Thankfully, he's not going too far. Evan has already landed a job at cooking at Lark and Licorous, the Seattle restaurants run by the James Beard award-nominated chef Johnathan Sundstrom. ("His food is amazing," Evan says reverently. I concur.)

The young Mr. Leichtling is pictured here with a bottle of Blanton's bourbon, his absolute favorite beverage.  (In case you didn't know, "Leichtling" is an Austrian name that translates roughly to "little lamp-lighting boy." Seriously.) Evan will be moving to Seattle ASAP, bringing with him his prized motorcycle--a 1983 Honda Ascot 500--along with his penchant for blasting the "Duck Tales" and "Alladin" theme songs on Prima's stereo prior to opening. We may not miss the music, but we'll definitely miss the guy.