We are really excited about some of the new additions to the menu...namely we added a Cote de Beouf into the steak frites section after we received rave reviews and a few ultimatums that we put it on our regular menu - a 32 ounce bone in ribeye for 2 people - served steak frites style. Daily our kitchen crew is creating a $3.00 brochette (basically a shish kabob but don't tell Sieb I called it that) at happy hour - $4 after happy hour.  Today's brochette for example is hanger steak, new potato, red onion and portabello mushroom with a fire roasted red pepper harissa sauce.  Additionally we added a delicious winter salad of napa cabbage, kumquats, and blood oranges with a baked goat cheese crottin.  Also the blend of sangio, merlot and primitivo from Whidbey Island Winery under the label of Prima Red has been released, is available at Prima and is DELICIOUS!
Label design by local artist David Gignac.


We heard of the first sighting of a grey whale in Saratoga passage yesterday.  Throughout March and April these sightings are common place as they migrate north on their journey from mexico to alaskan/canadian waters.  I picked up a new pair of binoculars over at Wander on Whidbey (one of my favorite newer shops, filled with outdoor gear...our own mini REI) so if you see a spout ask your server for the binocs to get a better view!  The Welcome the Whales Day is April 23rd - a parade and lots of educational opportunities - a great weekend to come up... especially if you have kids.

Our music schedule has some changes this month:
Danny Ward (there he is in the photo playing last week, photo courtesy of Drew Kampion)
will be playing Thursday March 3rd, 17th, and 24th 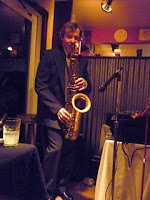 side note...did you realize that Danny Ward was playing sax in that one scene in An Officer and a Gentleman...he's got some GREAT stories about Richard Gere and the crew of that film!

This is the first weekend of the month so that means new exhibits in the galleries and the art walk is tonight.  Brackenwood's show is entitled "A Feast For the Eyes." and features oil painter Gail Weir and textile artist Cary Ann Hamer - opening on March 5th.  And opening at Museo on the same day is a show featuring Dan Ishler's ceramics and Kandis Susol's encaustics.

Wica has some awesome upcoming shows -  http://www.wicaonline.com/ as does the Whidbey Children's Theater - http://www.wctonline.com/
And we'll be teaming up with the Clyde next weekend when they show the Black Swan - we're going to try to replicate that tequila drink so come in before or after the show - http://www.theclyde.net/

We will be closed for a fundraising dinner for the South Whidbey Children's Center on Sunday, March 20th

As always, thanks for the continued support and we hope to see you soon!

Posted by prima bistro at 12:26 PM No comments: