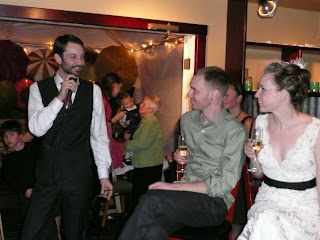 Rachel and I recently retuned from a few days in Vancouver BC. A short but sweet mini vacation as well as the opportunity to celebrate the successful conclusion to our first year of wedded-dom! Hard to believe, it is only one year since Sieb and Jenn shut down Prima and helped us throw the best party of our lives. During our trip, we shared many of the highlights from that day, including some of the hysterical toasts and speeches. Many of which I had forgotten. One of my favorite memories was the Herculean efforts of our self-appointed designated driver, Sam (the infamous wine rep from Noble Wines). Sam made sure that all 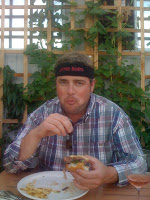 those in need arrived back (safe and somewhat sound) to each nook, cranny and corner of the island (and China City). A personal note to Sam: if and when Rachel and I get married again, we promise you will get an actual invitation!  As long as you promise you don't wear that headband.

We stayed at an old (it was built in 1279 BC, or something like that) but beautiful hotel called the Victorian, on Homer Street in Gastown. However, we did opt for a suite rather than one of those classic European style accommodations with shared bathrooms. I am way shier than Rachel. We went with few plans except to visit a few museums and of course drink and eat (in that order). Somehow we never made it to the museums but were incredibly successful with the latter. 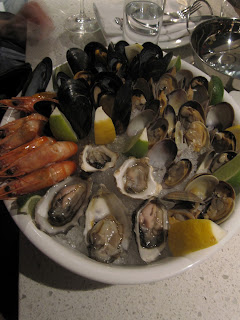 Leaving out the drinking, we did an excellent job of re-exercising our seafood taste buds, with a particular focus on oysters (it was a second honeymoon… of sorts). We ate them at nearly every place we went. The best, in our humble opinion, was a medium sized oyster from the Strait of Georgia, called a Gem, which we found at the Pourhouse Restaurant also in Gastown. I can only say that in every way we had a great time… thank you, thank you, you delectable and beneficial mollusk!  That's Rachel's dinner at Cork and Fin over there on the left.  She ate it all. 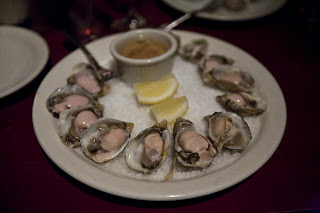 Speaking of oysters, we (Prima Bistro, you, me, all of us) are so lucky to have one of the greatest oyster resources on the west coast in our backyard… Penn Cove. Penn Cove oysters have won 7 of the last 8 Most Beautiful Oyster Competitions held each year at the Elliot Oyster House in Seattle – which, by the way, we beat in King 5’s Best Out Door Dining category, last year. I’ve had Penn Cove oysters at Bay 13 in Portland (Rachel’s former place of work), Zuni in San Francisco, Spago in Las Vegas and of course all over Seattle. They are the perfect ambassador for the flavors and beauty of Whidbey Island (except possibly the view of the mountains from Cascade Avenue on a blued sky afternoon). They pair exceptionally well with many of the fine white wines we have on our menu.  Pictured above are Penn Cove selects...served how we serve 'em...on rock salt, with a white wine mignonette and lemon.

In the 19th century Oysters (just like lobsters) were not the luxury item they are today; cheap and eaten primarily by the working class. Just another clue to my growing conviction, either I was born into the wrong class or, at a minumum, the wrong century! According to wiki, the first oyster beds to become word famous were located in waters around New York City and became popular in that city’s booming restaurant trade.
While oysters are traditionally featured in summer white wine events, I think they are delicious any time of year, even when there is a little snow on the ground. So, put on those mukluks (if necessary), come in for a little wine (maybe a Sam sighting), we’ll shuck you a dozen of Penn Cove’s finest, and the rest, well…
Posted by prima bistro at 3:46 PM No comments: