The BEST foraging season EVER! 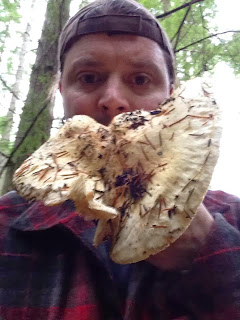 This mushroom season has been the best one we've ever seen.  The hauls Sieb comes in with daily are just out of this world.  Upwards of 30-40 pounds of chanterelles, or lobsters, matsutakes, and yellowfoots. And no, he isn't going to give up his spots to anyone!

We were recently visited by Seattle Weekly food writer, Nicole Sprinkle, who tagged along with our brother in law, Shane Ryan, chef of Seattle's acclaimed Matt's in the Market, to go foraging during this most amazing mushroom season.  Shane brought her up, did some mushroom hunting, then had lunch at Prima.  Here's a link to the whole article:

It's a pretty long story, so here's an excerpt that we particularly like:

..." Another call comes: Sieb confirms he’s still loading up on hedgehogs. “How can we not be finding them?” I ask Shane desperately.

“Ahh, he may just be a little deeper in than us.” We find a few chanterelles that aren’t rotten—golden, with ridges (rather than gills) that run down the stem. At this point, I’ve filled an entire shopping bag with mushrooms, and it’s only been a little over an hour.

We make a few clumsy circles until we find our way back to the car. Next to the red Pathfinder is another hulking red vehicle with stickers of guns and skulls on the back: Sieb.

We drive to Langley to have lunch at Prima Bistro, Sieb’s unassuming French-inspired restaurant. Hidden atop a market and mercantile shop, it has imposing, wide-open views of the bay. We sit at the bar and order one of the best meals I’ve had in months: veal sweetbreads in an apricot gastrique and a dish of poached eggs with chunks of foraged lobster mushrooms, croutons, and pancetta that they smoke in their own tiny meat locker. The lobster mushrooms are meaty and have a very subtle seafood-like flavor—that fifth flavor that the Japanese call umami and which translates to “pleasant savory taste.” Shane has some wickedly good-looking bone marrow on toast.

While we’re sitting there shooting the shit, Sieb walks in. He’s tall, with long, dark hair pulled back in a ponytail, gold hoops in each ear, and tats all over his arm. He’s holding several bags of mushrooms, which he’ll be serving in the restaurant, of course. He sits down and orders us all glasses of Fernet Branca on ice—a clear indication I’m in the company of chefs.

Satiated by the meal and the mushroom extravaganza, Shane and I are quieter on our trip back. He tells me it’s his night off, and he’s going to prepare a matsutake salad for his wife when she gets home from work. Sliced super-thin, he adds. These mushrooms are too special to be cooked. I get mine home, wash them lightly with wet paper towels, and place them all over my kitchen counter. It’s pretty surreal-looking."... 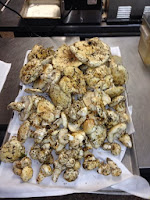 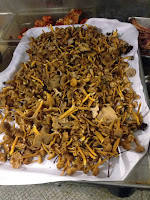 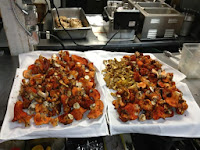 Posted by prima bistro at 10:51 AM No comments: