Online review sites have the ability to get me super fired up.  Someone can have a complaint about a little thing, not say a word to the server and then go online and completely bash us.  It does make an impact.  People do read yelp and trip advisor and make their decisions based on what they read.  I have learned that there are super savvy reviewers and people who are out there with some sort of ax to grind.  I do sometimes use yelp when I'm trying to figure out where to eat...and I completely ignore the one star reviews...unless there are a lot of them for a particular restaurant.  I like to read the 3, 4 and 5 star reviews and I mostly look for people who have some whit about them and critique a business fairly.  FOR EXAMPLE...Elizabethe A recently reviewed us on Yelp (i got her permission to use this photo).  I LOVE this review and I really love the photo.  She obviously gets our restaurant.  She mostly loves everything.  And she gives us some good critiques on a few things as well...which we always consider and use for tools to improve. 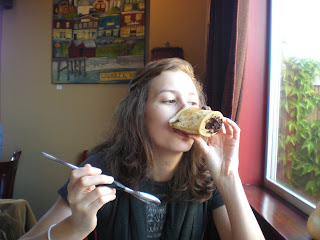 Every single menu listing sounded to-die-for so we just ordered as many things as possible and shared. In the order that they appeared:

Scallop crudo: any place that is not a sushi restaurant that serves RAW scallops gets a billion points in my book. The dish came out with a generous heap of beautiful, fresh, delicious sliced RAW scallops, mixed with roasted red peppers and topped with a citrus vinegar dressing. I hate to start too strong, but it was the best dish of the meal.  Pork belly: Nice fatty hunk of pork belly served with an apricot mustard that I was less than pleased with. I think that a simple apricot preserve probably would've suited the dish better.
Lamb chops: topped with some kind of honey glaze which was the perfect amount of sweetness and served with a slice of fried polenta that almost reminded me of corn bread. Even though the lamb chops were cooked well done, it still had amazing tenderness and flavor.
Bone Marrow: it was my first time! We received a generous amount accompanied by some toast and a little parsley caper salad. My description of bone barrow would be "like fat but it disappears in your mouth before you get to fully enjoy it". Yea so I'd probably rather be handed a hunk of fat to spread all over my bread and eat. But that's just my personal preference
Fingerling potatoes: fried in duck fat. a hybrid between roasted potatoes and a french fry, these fingerling potatoes were cut in half, fried in duck fat, making them extra rich and slightly crisp, and then served with a sinfully creamy aioli with the perfect amount of lemony tang. This dish is a must-have.
Steamed mussles: steamed in a white wine, garlic broth. Half a pound was enormous, mussles were delicious and meaty, simple, yet perfectly done. Can't say much more about that.
Cheesecake with blackberry balsamic redux: the cheesecake had a whipped texture which is not usually my favorite. I prefer it to be dense, but that's just me. The redux was not balsamic-y enough for me. But it was still good.
Smores chocolate blah lava blah blah graham cracker blah cake: The usual chocolatey explosion dessert that all great restaurants are required to have and this one was very well done. The lava cake had the perfect texture, firm on the edges and molten in the middle. Great whidbey island vanilla ice cream,  a little heavy on the marshmallow sauce on top. If you try to order this and eat it all by yourself you are a fool. I am a fool.

Every ingredient was perfect, ever dish well thought out, every item executed well.

Anyhow, thanks Elizabethe A for taking the time to mindfully review the restaurants that you review and I promise the sweetbreads won't be 86'd when you come next time and it'll be on me!
Posted by prima bistro at 9:56 AM